I suppose most good stories begin with a bright brisk morning with lots of anticipation and forethought about how the day will unfold. This is not one of those stories.

You see. I had Gabby’s field trip to the Pumpkin Patch with her class all mapped out and the morning was brisk, but I changed my plan at the last minute. From that decision on, each event that unfolded was evidence that my decision to change my plans was wrong in every way.

Here was the plan:

April and I were going to be chaperones for the trip. I was able to get the morning off from work and had been looking forward to this adventure. Amber had to work so she wouldn’t be able to make it.

Normally, Gabby goes to April’s around 8:00AM or so. She has to be at school at 9:30AM. The Caravan for the Pumpkin Patch leaves the school at 10:30AM and we should return with all the kids safely by Noon.

I was going to drop Gabby off at Aprils as usual and meet them at the school at 9:30AM that morning. That would give me a little time to catch up on some Anniversary plans I was making and give Gabby and April their usual morning time together. After April dropped Gabby off at school, she and I were going to get breakfast. I was thinking… a leisurely cup of coffee, get the “scoop” on what Amber wanted for our Anniversary, and then head back to join the Caravan at 10:30AM

At the last minute, I decided why take her around the corner to April’s for an hour then meet them at the school. April could just pick us up and we could all ride together. After all that “makes the most sense”.

I arranged all of the things we’d need to take with us. Her book bag (containing lunch, school picture money, show and tell- horse for the letter ‘H’, and several other things), her swim bag for swimming lessons that night, and all of my stuff.

The arrangements I was able to make for our Anniversary were minimal and time crept up on Gabby and I. April arrived in the driveway as we gathered all of our thing and hopped in to go.

When we arrived at the school is when we realized that “all of our things” were NOT actually ALL OF OUR THINGS. We left her book bag. You know. The one with the “show and tell horse letter H” and her School picture money. The look on her face was not only disappointment, but bewilderment. You could see the lines on her face connect to scream out “what will I use for show and tell?”

We assured her we’d get her things and return. We knew it would be in vain. They were going to do show and tell BEFORE the field trip (this we didn’t remember at the time).

We bolted! April was set on getting a coffee and frankly, I NEEDED one at this point. We drove to a FIVEbucks A.K.A. Starbucks and grabbed a coffee. Leaving there we had approximately 30 minutes to make two 15 minute drives separated by snatching a book bag off the kitchen counter.

Traffic was STILL. It seems that the DOT decided that there was no need or the 3 lane road that they’ve spent 2 years completing that morning. In fact, they had reduced it to 1 lane furthering my conspiracy theory of DOT Bottlenecks to increase job security.

We found an alternate route and zipped home.

During our trip home, I get a call from the office with a “Minor Emergency”. The sort of thing that no one will get hurt if you don’t respond quickly, but requires immediate attention none-the-less. I was able to get that handled over the phone, but it did add to the stress level.

We made it home, I grabbed the bag, and turned back briefly to see my keys hanging on the key holder by the dryer. The mornings events unfolded in my mind and I couldn’t resist the divine instruction that said, “whether you THINK you need them or not, grab them.” I did.

We arrived at the school just as the kids were being loaded into the Caravan. We were the last car. I installed the seats of the two boys riding with into April’s car and then installed the boys.

News Flash: Boys are different from girls. They have to TRY everything out in new surroundings more than girls do.

With his glasses in his hand I plopped him into his booster and strapped him in. I folded the set from the middle row down, loaded the second seat, then the second boy. For a moment… there was a… well… smell.

The rest of us got in the car after Gabby was locked and loaded we were READY. Gabby informed us that Mrs. Georgi helped her to use her ‘H’ Headband as her show and tell because it was “halloweeny”. Crisis averted.

The Caravan of minivans and SUVs began to creep then roll then go. Just then a voice from the back-back said, “the glass came out of my glasses”. Picture the boy from a Christmas Story. That was who was in the back-back. All I could see as he peered through his thick glasses at me with one eye shut was… “you’ll shoot your eye out kid” from the movie.

The car came to halt and we hopped out. April looked all around the car and I scoured the parking lot. NO LENS. We told him it must be under the seat and we’d get it when we arrived at the pumpkin patch. He looked at us in a perpetual wink and said “ok”.

News Flash: Boys are not into Belle, Pocahontas, or Arielle. Especially singing their songs. The Disney CD was a Bust with these guys.

“Can you see without your glasses?” April asked
“No. That’s why I where glasses.” He said. “Hey we just passed Mi Rancho”
“Don’t worry. We’ll find your glasses.” April said.

The pumpkin patch was amazing. Hundreds of little pumpkins and big pumpkins lined as casually as possible in the front yard of a church. Around back there was a lady telling Halloween stories for the kids. Gabby and our 2 new travel companions hurried around to start listening. The boy with the glasses had to hold on to me so he could find his way. 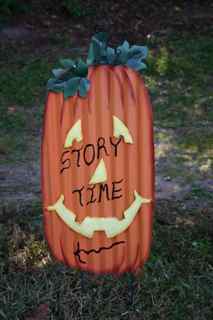 After about a ½ an hour or so, the kids had played games, listened to stories and picked out a tiny pumpkin to take home. This pumpkin cost a $1. A bargain, until you don’t have a dollar. I don’t carry cash. Usually ever. Luckily I had a change left over from something unusual from earlier.

As we opened the door to April’s car to “re-install” the passengers, a wafting smell balled it’s fist and popped me in the nose. It was kid in the front-backs seat. “It smelled” is an understatement.

News Flash: Parents, kids will from time to time let nature take it’s course regardless of where they are. Car seats were designed knowing this. You CAN take the car seat cover off and WASH it. Do not be afraid. This really works.

As we headed back to the freeway, the though occurred to me that we just took 2 kids we know very little about across state lines and had allowed one of them to destroy his glasses. My thoughts were broken up by what can only be described as a conversation. Although, conversations normally involve people talking about the same thing, with 3-4 year olds, it only means that the topic they are talking about be vaguely related.

“This is the way to my Nanna’s House” said Front-Back boy.
“Where’s a Banana House”, asked Gabby.
“You can’t make houses out of bananas” said Back-Back boy.

This ensued for 10 minutes. It was nearly the cause of our demise. April and I laughed so hard we started to cry. It was like the pent up frustration of the morning was released all with this one laugh. We needed that.

Front-Back boy and his seat were safely returned to the school as well and probably by now has visited his Banana’s House.

Gabby had a great time and so did we.

Can you spot the 4th McKinney?  Amber was really uncomfortable, but we did make it through half of the 3 mile walk at 8 months pregnant.  After a pit stop at the Moon Cafe, we were done. 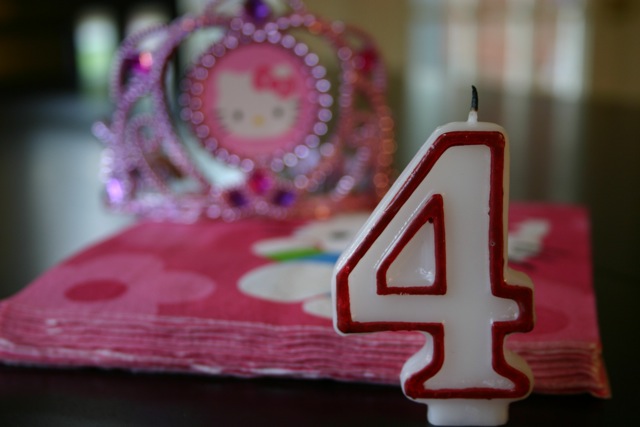 HAPPY 4th BIRTHDAY GABBY
Gabby’s Year of Being 3 is Over. Here’s a little photographic evidence that she had a blast! Too Bad she’ll never be 3 again. 4 is looking pretty good though.

Remember to Leave a Your Birthday Wish to the Gabbster as a comment! We are going to read them to her.