In the last couple of weeks, I’ve seen a lot more of this on my clock in my car than usual. We have a new strategy at work this year and I’m trying to make the most of it. It seems to be going well, but I’m having to work a little later just to make sure I’m getting everything right. The good thing is that I’m enjoying the type of change. I believe it will pay off, but because it is a lot more relationship building it will take a little longer to reap any fruit. I still am enjoying it. There have been a few growing pains. I have ruffled a few feathers, but the experience I do have tells me that means I’m doing something right. When the big boys get upset…you must be a threat. If you are a threat to the big boys…you are doing something right. The Lord is truly blessing me and I look at that like sunshine on a Sunday morning.

Up close and personal with Gabby! She is talking more often and more clearly. From telling Butler to “get in the house!” to telling me her chair is “too heavy” to pick up. The more she listens and learns, the more she spits out.

Potty training is going pretty well. We had a little bump in the road after a 4 day straight “no accident zone” we had a couple of accidents. We got worried because she claimed it hurt when she went. Some of that is probably true. Some of it is probably the best acting I have ever seen. What ever it is. She is doing pretty darn good. As you can see, the camera loves her and I think its a mutual relationship. 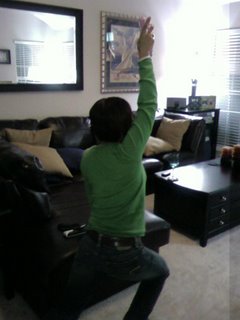 Wii love to bowl! April got Kenn a Wii for Christmas and honestly bowling rocks! Last Friday night, we bowled like we were on the league. Hell, like we were the champions of the league. The only things missing were the chili dogs and the cheap draft beer. April pulled out a surprising win or two and made me feel like I got “Munsoned“. I fantasized about being “Big Earn McCrackin” from King Pin. Amber and Kenn seemed to bowl as if it were second nature to them. And I had a very disappointing night in the lanes not even breaking a 200. It’s tough to win on the Wii circuit. Winning means bragging rights for the next full week. As you can see here, April is a natural. Look at that form. That poise. That Championship finishing stance… Well you get the picture.

Bringing the family all together for a meal seemed somewhat impossible. For one, I am almost positive I wasn’t present at the discussion naming Thursday night Sho-Chins the place to be today. This morning when I was taking some meat out of the freezer to thaw Amber told me we were going out to eat tonight. That honestly was the first time I heard of it. None the less, it sounded like a great idea. After a long day and a rush home, we gathered our things and took off for Sho-Chins. Gabby almost peed in her pants. However, for the last two days….Yep…That’s Right!!!! “Big Girl” underware and NO accidents!!! We didn’t want to break her streak. Amber ran an SUV or two off the road and probably ran over a couple of pedestrians between Grovetown and Evans, but we bailed out of the car in the Sho-Chin’s parking lot porta-potty-lid in hand. Gabby and I bypassed the family with a couple of nods and smiles.

The bathroom was gross! What is it with guys that we have to go all over the bathroom floor, walls, seat…..everywhere but in the bowl. It makes me wonder what these people’s homes look like. I shushed the Grandfather in me and Gabby rang the bowl without an accident again.

After settling into dinner, the conversation sounded much the same. But something was different. The conversations sounded the same as they used to before all of the “history”. It was pleasantly… well… normal. Gabe was still being told to do things he would certainly forget, we still talked about Gabby, and Aunge was still off at school. It was so pleasantly normal that I began to think of the “founders of the feast”. And whether they ever read this or not, thank you Grandpa John and Grandma Olga. Thank You!