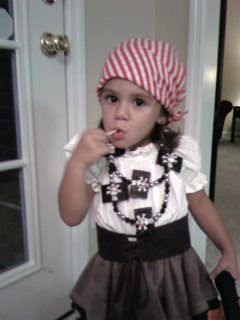 Halloween is here along with lots of candy and tummy aches. Goblins and Gouls take the place of little boys and girls and skeletons and witches come out of the darkness for this one time a year. Not to mention little pirates. Especially girl pirates! Aaaaarrrrggh!

Gabby wasn’t nearly as tired as mom and dad…she didn’t walk much either. She did have a great time. By the last house she had gotten used to the idea, but still wouldn’t say trick-or-treat.

Only one day left until Halloween. What a frightening thought. Soon there will be little Spidermans, Power Rangers, and one very sweet little Pirate (complete with patch). Parents will rush home to get kids ready, suppers will be cast aside for candy, and tummy aches will soon follow.

Actually that is pretty frightening. Perhaps we will all survive…perhaps.

Five years have flown by. It seems like just yesterday that I was trying to figure out what to say to Amber’s parents when I pulled up to their house, unexpected. I knocked on the door and their face revealed their surprise. As well it should have. Their daughter was 3000 miles away in California and I was supposed to be in Atlanta getting ready to fly out there. I was not supposed to be on their doorstep with the look of…”I have news to discuss with you” look on my face.

I walked in as bravely as I could and asked for their blessing to marry their beautiful daughter. A whirlwind of plans and excitement followed for the next year and a half. Finally, the big day had come. Sure, we told everyone we were fine. I was NOT fine. My stomach was turning, my palms were sweating, and my knees were knocking again. I didn’t show it (I don’t think), but I was freaking out a little bit. Not because I felt like I was scared or making a mistake. I was freaking because I knew that I was finally doing something that I was meant to do since before I was born…marry Amber. I haven’t looked back and I thank the good Lord he allowed me to have her in my life.

There are a lot of great movies with really corny lines in them. Growing up in front of a TV I know most of them. Well, forgive me if I get a little cheesy, but when you know it’s meant to be and God puts it into your heart, nothing else can get in the way. That’s how I have felt for the last 5 years of marriage and I’m blessed to say the future looks even better.

I guess these two aging tomatoes belong together.

Check Out This Video

Thank you to all of you who read the blog and come back week after week to see new pictures. There are a lot of new links to click on now and I’ll be adding more too.